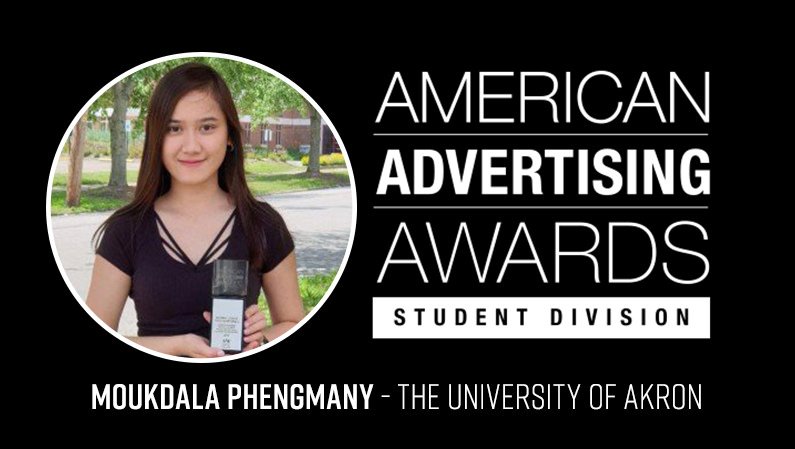 Phengmany’s winning entry, a three-dimensional walking map created for the Cleveland Zoo (image attached), was selected from more than 285 student entries judged at the national level. Only 29 Gold and 34 Silver Student ADDYs were selected in total. The Cleveland Zoo entry was judged on its creativity, originality and creative strategy. This is the fifth consecutive year that an AAF-Akron student member has won on the national stage.

Phengmany graduated from The University of Akron Myers School of Art in May and has relocated to Singapore to join a start-up as its chief designer. She will be working primarily on digital marketing and is very excited about it. “I eventually want to establish a name for myself in the graphic design world,” says Phengmany, “and possibly, one day, give it back to society.”

AAF-Akron also was honored at the annual ADMERICA event for its outstanding programming and membership efforts. AAF-Akron placed first in Programs and third in Membership Development within Division 3 of the 2019 National Club Achievement Competition. The annual competition is designed to recognize significant contributions of its affiliated advertising clubs and to showcase the programs and projects that these clubs undertake each year. It reflects one of the American Advertising Federation’s primary objectives to recognize excellence and encourage high standards among industry professionals. This is the fourth consecutive year that AAF-Akron has placed in the competition.

“AAF-Akron continues to excel at developing recruitment materials and high-quality programming that engage our prospects, membership and the local advertising community in general,” said AAF-Akron President Melissa Olson. “I sincerely thank the AAF-Akron board, as well as our teams, membership, and sponsors, for making this ongoing success possible.” AAF-Akron is pleased to announce that two of its members, along with the chapter itself, won national awards at ADMERICA, AAF's national conference, held June 2–5, 2022 at the Gaylord Opryland Resort in Nashville, TN. Jeff (JD) Dumire at the Salute...

END_OF_DOCUMENT_TOKEN_TO_BE_REPLACED Take ADvantage of Your Membership Benefits!

AAF-Akron ADvantage Card Be sure to take it with you everywhere you go. It’s packed full of valuable discounts from area restaurants and caterers and it’s valid through April 1, 2023!.  10% off total order. BigEues.com 10% off...

END_OF_DOCUMENT_TOKEN_TO_BE_REPLACED Congrats to our District 5 Winners!